With next week’s FERC meeting on SEEM proposal, the question is back on the table: will FERC approve a group of southeast utilities’ proposal for organizing a market? This fall is the first legislative session across the US and other states where the discussion is around clean energy and what incentives are needed for utilities to deploy more renewables. With the Biden administration’s “Build Back Better” model around infrastructure, will US Congress see a need to mandate organized markets, since we know corporate renewable energy buyers need regulatory stability in the marketplace?

Read more: The latest on SEEM, FERC, and the impact on renewable energy

The story on what southeast utilities would do if FERC does not approve their proposal is unwritten. FERC could ask SEEM proponents to go back to the drawing board and include governance, stakeholder participation, market monitor, and price transparency, to name a few organized market principles. Or FERC could approve SEEM since the utilities say their purpose is to interconnect more renewables.

How can FERC say no to utilities who want to organize themselves in a market construct? Midwest ISO became the first Regional Transmission Organization (RTO) in December 2001 when MISO Transmission Owners formed an agreement to organize similar to southeast utilities. But the key difference with Midwest ISO, which is Midcontinent ISO now, is, right from the start, the ISO had stakeholder committee structure and Board governance, including independent market monitoring. That structure takes a lot of scope, schedule, and budget.

How about we Build Back Better markets?

While President Biden and the energy secretary visit the national labs and showcase their “build back better” agenda, it is time to consider whether we need to give our market operators more teeth in regions that already have organized markets.

What is true for corporate buyers is true for consumers in general, which is a stable set of rules that identifies transmission studies that enable faster renewable integrations. Corporate buyers of renewable energy bring economies of scale that are a healthy compromise between utility-scale and residential-scale renewable projects.

FERC has opened doors on both fronts with an Advanced Notice of Proposed Rulemaking on transmission planning and generator interconnection and an Order 2222 on distributed energy resources aggregation. But FERC needs the backing of US Congress to mandate RTOs to execute on this administration’s vision to integrate more renewables.

Will US Congress mandate organized markets?

It remains to be seen whether the US congress would tackle the hard issue of mandating organized markets across the country because renewables are not scalable if developers face multiple regulatory approvals. It might be time to bring back former FERC Commissioner Pat Wood’s Standard Market Design, which was ahead of its time in the early 2000s.

The US Congress can achieve multiple energy policy goals with a standard market design, leveraging the experience gained by current market operators. If the entire continental US is under organized markets, renewable developers and corporate buyers pay more attention to their core business of putting together renewable deals instead of following RTO committees.

Record-breaking solar interconnection requests at RTOs are quickly becoming yesterday’s news in the energy world. The energy storage requests are today’s news, as the figure below indicates. PJM has more than 40,000 MW of energy storage requests waiting to be studied. The expertise to study these storage resources, which inject energy when they discharge and draw energy when they charge on the transmission grid, resides at RTOs. Hence by mandating RTO participation, the US Congress will be doing renewable project developers a favor because RTOs can churn out studies faster in study cycles like MISO. 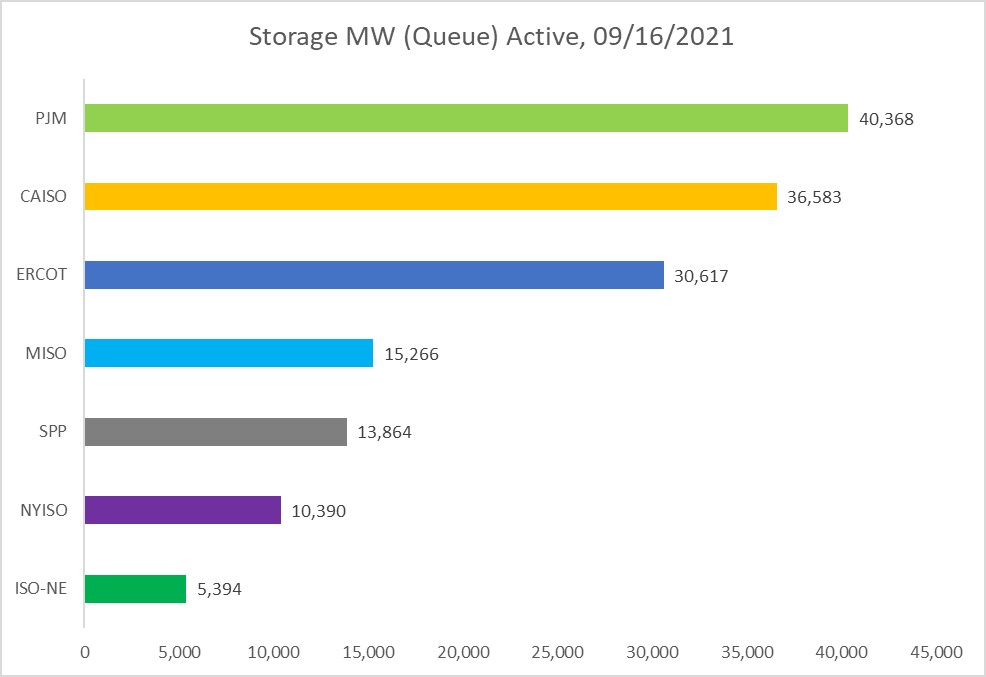 What about Clean Electricity Payment Program?

This proposal puts more pressure on utilities to organize themselves in market constructs such as SEEM because what will the utilities do with excess renewable energy? Those utilities cannot simply dump the excess energy on their neighbor’s transmission system without reserving transmission capacity.

This transmission reservation is not an issue in an energy market because all parties share the transmission system and depend on the independent grid manager to schedule network service. If an interconnection customer has a non-firm service, they get curtailed. The point is, the rules are transparent in the marketplace. Hence focusing on mandating organized markets enables renewables integration.

FERC is willing to work towards reforming interconnection rules and transmission planning protocols. But FERC needs help from US Congress. Unless utilities are mandated to participate in organized markets, there will be proposals such as SEEM, which may not go the whole nine yards in a market structure. With more renewables on the grid at both utility-scale and distributed-scale, it is time to make market participation mandatory.